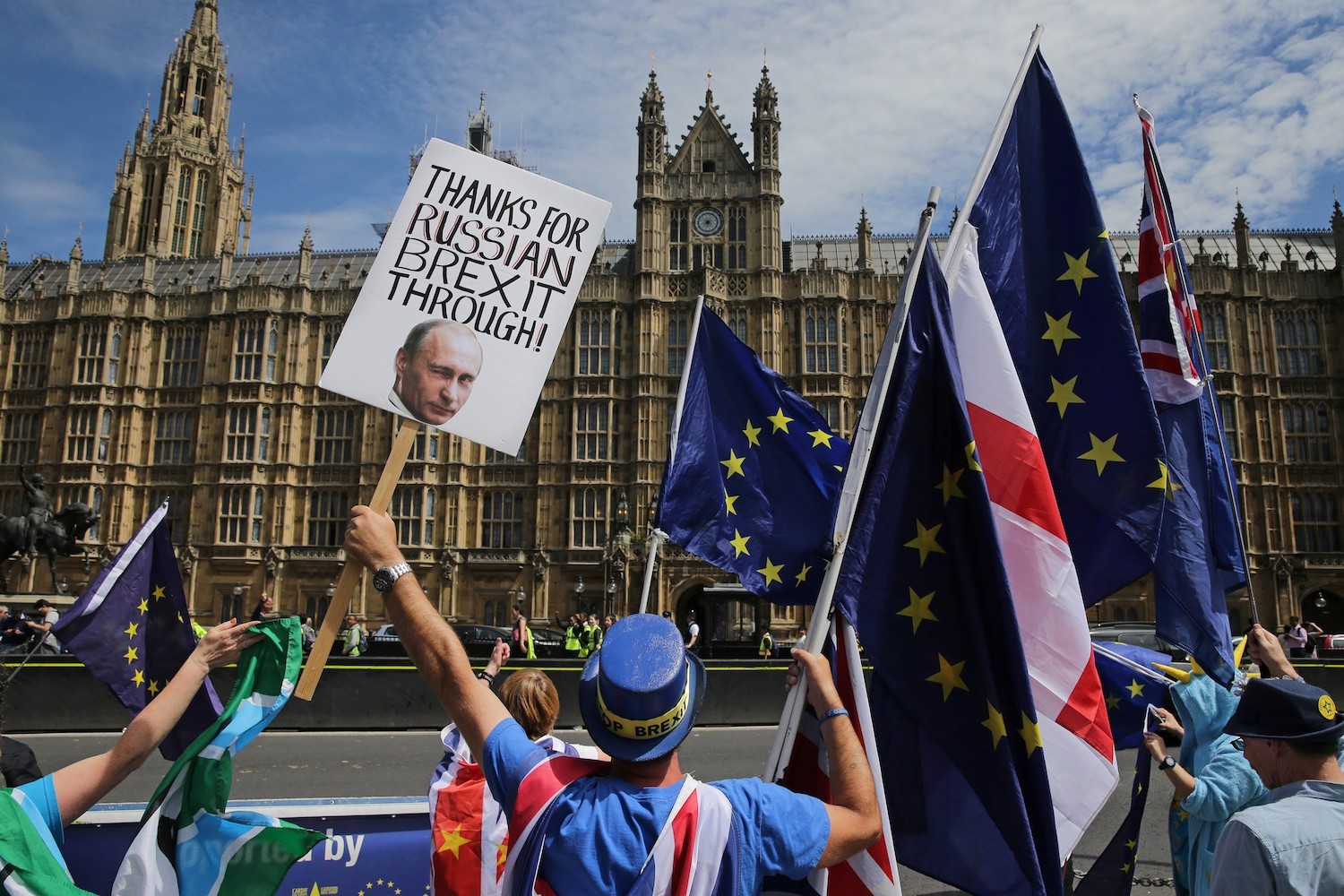 Many Brits continue to believe that Russia interfered in the Brexit referendum campaign by financing and promoting the Leave campaign. In addition, the legacy of the poisoning of the Skripals will impact bilateral relations for years to come, with no mutually acceptable resolution in sight.

After more than three years of agonizing divisions, missed deadlines, and costly uncertainty, the United Kingdom finally left the European Union on January 31. Many things will change radically, but despite some predictions, relations with Russia look set to remain the same.

While for most Brits and UK residents nothing has changed — the same rules will apply to travel, trade, and funding until the end of the transition period eleven months later — the UK no longer has a voice in any EU institutions. Moreover, British businesses may still face the high cost of a no-deal Brexit if the UK and EU fail to reach and ratify a free trade agreement governing their future relationship by the end of the year. In addition to that, the UK will have to negotiate its own bilateral agreements with dozens of other countries, such as Canada, Japan, and Turkey, with which it currently has a free trade relationship through the European Union.

Prime Minister Boris Johnson has vowed not to extend the transition period beyond the December 31 deadline. Like his predecessor Theresa May, he has also ruled out options for remaining in the single market or entering into a customs union with the EU, which would make the UK subject to some EU regulation, like Norway and Switzerland. This means that in a year's time, the UK is likely to be less integrated with the EU than Turkey or Ukraine, which have both customs union and Deep and Comprehensive Free Trade Area agreements with the bloc.

In a year's time, the UK is likely to be less integrated with the EU than Turkey or Ukraine, which have both customs union and Deep and Comprehensive Free Trade Area agreements with the bloc

Brexit is unlikely to significantly affect Russia's relations with Europe, which have been witnessing a tentative revival in recent months. This is driven by some progress in the Normandy talks on resolving the conflict in eastern Ukraine, changes in the EU leadership, and renewed EU-Russia dialogue on key foreign policy issues, from the Iran nuclear deal to Libya, Syria, and the climate change agenda. The growing fallout from the U.S.-China strategic rivalry is also pushing Europe and Russia closer together. However, the path toward anything resembling the normalization of these relations remains blocked by the lack of tangible progress in the implementation of the Minsk agreements aimed at bringing peace to Ukraine.

Brexit is in itself unlikely to change the current dynamic in any significant way. Although the UK's departure will remove a strong supporter of tough sanctions against Russia from the EU decisionmaking table, many like-minded countries remain, meaning EU sanctions are likely to remain in place even after the UK's departure.

Nor will Brexit weaken the EU from within, as some in Russia have predicted, or trigger more exits by other member states. If anything, it may accelerate the process of closer political integration being championed by France and Germany. The UK's departure will not weaken Europe's resolve to strengthen its defense capabilities, including its deterrence to potential threats from the East. One area in which EU-UK relations are likely to remain as strong after Brexit includes security, intelligence-sharing, and police cooperation. The UK will be an even more active member of the NATO alliance, and British troops will remain stationed in the Baltics.

Brexit does not provide an obvious path toward improving UK-Russian relations either. Many Brits continue to believe that Russia interfered in the Brexit referendum campaign by financing and promoting the Leave campaign. These perceptions will not go away any time soon, and more investigations will follow — not least the parliamentary report on Russian interference, whose release was delayed ahead of the December general election. The UK is likely to adopt even tougher sanctions and regulations scrutinizing Russian financial inflows into Britain, including on its property market. Finally, the legacy of the poisoning of the Skripals will impact bilateral relations for years to come, with no mutually acceptable resolution in sight.

Brexit does not provide an obvious path toward improving UK-Russian relations either. Many Brits continue to believe that Russia interfered in the Brexit referendum campaign by financing and promoting the Leave campaign

In the long term, the UK faces greater uncertainty over its role in the global economy, and even more so over its role in rapidly changing geopolitics. Free-standing medium powers are currently rapidly losing the capacity to influence global and regional affairs. Membership in international institutions like the UN, OSCE, or G20 does not work as a power amplifier, as many of them remain deadlocked. It is much harder for individual countries to navigate U.S.-China rivalry. This was clearly demonstrated in the UK's recent dilemma over whether to allow the Chinese firm Huawei to provide the UK's 5G architecture. It is also much harder to champion the values of democracy, human rights, and freedoms through "independent" foreign policy.

The UK's departure from the EU presents an important challenge for the EU in revising its European Neighborhood Policy. In the past twenty years, this strategy was based around one-way convergence and integration. Now the EU will be surrounded by three states — Russia, Turkey, and the UK — that are very different, but important and powerful in their own right, none of which will be seeking convergence with the EU (beyond perhaps trade in goods). The EU will need to find a new strategy to build these relationships collectively. This is a task for the next European commission; the next Russian, Turkish, and British leaders; and the new world.