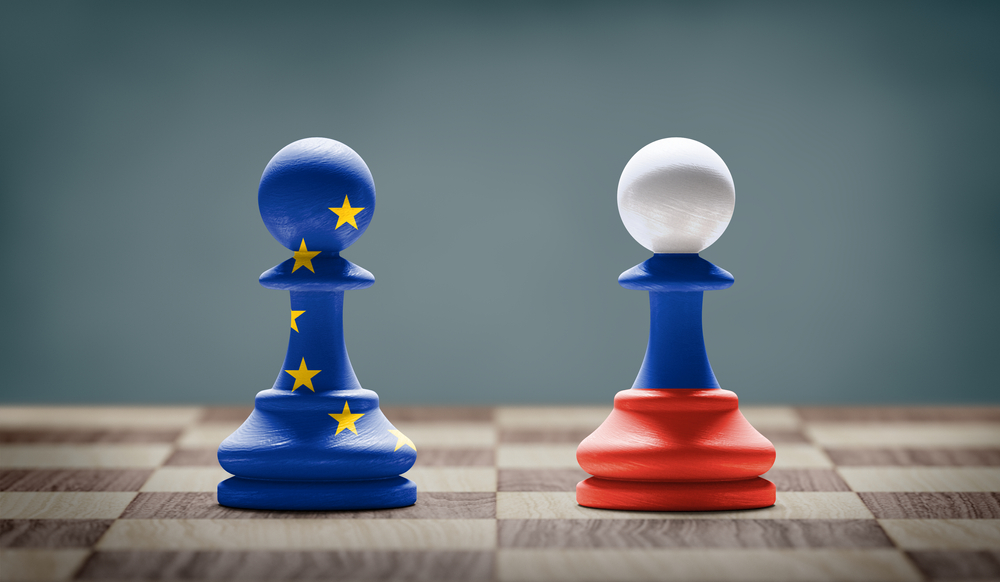 I
EU-Russia relations at a new low – what now?

The COVID-19 pandemic, the political crisis in Belarus, and the Navalny incident have made 2020 the most complicated year in EU-Russia relations since 2014. The EU-Russia Expert Network on Foreign Policy (EUREN) spent time this year reflecting upon "Alternative futures of EU-Russia relations in 2030". We also encouraged our members to share their views on present developments. This EUREN Brief is part of a series about the question "EU-Russia relations – what now?". See also the contributions by Timofey Bordachev, David Cadier, Sabine Fischer, Hanna Smith, Ivan Timofeev, Sergey Utkin, Ernest Wyciszkiewicz.

t has become a commonplace that EU-Russian relations are at their lowest point. But nearly every day they hit another new low. As if to illustrate that, Russian Foreign Minister Sergey Lavrov recently suggested that Russia could temporarily stop communicating with the EU. [1] He was responding indirectly to European Commission President Ursula von der Leyen's assertion that Russian behaviour was getting worse all the time. [2]

Analysts had previously argued that a shared threat would force Moscow and Brussels to reassess their positions. The 2020 pandemic experience has demonstrated that (so far at least) this is not the case; instead existing problems became more pronounced and positions on both sides are now even more entrenched. Either the pandemic crisis has not (yet?) been severe enough, or the contradictions between the EU and Russia are too fundamental to overcome.

Five factors contribute to this:

1. Both the EU and Russia believe that time is on their side, that they just have to wait. Brussels expects internal changes in Russia, resulting from profound economic problems and an aging political elite. Moscow, in turn, sees international relations as increasingly chaotic and believes that profound changes are under way that will undermine the West's positions. Internal economic and social problems in the EU reinforce Russia's negative view of its prospects. So, when the EU proposes returning to business as usual on the basis of Russia fulfilling a set of conditions (Minsk 2 first and foremost) Russia responds that it does not want to have any business with the EU at all. [3] Both the EU and Russia remain strong enough to believe that they can survive without much contact with the other.

2. There is a profound lack of trust on both sides. Any initiative by Moscow or Brussels is treated by the other side with suspicion and zero-sum thinking at the elite level. Mounting accusations of disinformation and dissemination of fake news percolate this mistrust into the civil societies on both sides. The level of mutual mistrust is such that both sides suspect the other of exploiting the pandemic. For example, in Brussels and other EU capitals many believe that Russia uses COVID-related developments to further discredit the EU, and that Moscow politicises the development of a vaccine. Russian experts, on the other hand, speculate about the EU making the reopening of the borders politically conditioned.

3. The entrenched problem of status entered a new cycle, best exemplified by EU-Russian debates on rules-based order. Russia defends its actions in terms of international law. The official discourse embraces the key concepts of today's international order (democracy, human rights, rule of law, sovereignty, self-determination, multilateralism) but Moscow expects other actors to recognize its right to interpret these norms when applying them to specific contexts. The collective West (including the EU) denies this right to Moscow. The notion of a rules-based order that emerged in the West on the basis of (Western) conceptual developments is a response to Russian attempts to (ab)use international law interpretations. It clearly indicates the Western preference for unilateralism in this field, which Russia is unlikely to accept.

4. The ability of economic relations to provide a safety net for EU-Russian relations is declining. Although the EU remains Russia's biggest trade partner, its importance has been reduced by both its own sanctions and US secondary sanctions. The latter are more rigid, and deprive the EU of flexibility. The EU's own economic and social problems further discredit it in the eyes of the Russian political elite. Moreover, Western sanctions fostered an import substitution strategy in Russia and enhanced its pivot to the East, while the EU's energy transition will in the long run shrink its Russian hydrocarbon imports. Finally, while the Russian economy is stagnating, it is stable enough for the present political elite to protect their positions – while increasing the citizens' welfare does not seem to be the primary goal of Russia's foreign policy.

5. Internal politics is becoming profoundly geopoliticised. Russia led the way, accusing the West of interference in its domestic affairs and placing constraints on NGOs. Recently President Vladimir Putin stressed that the civil society should be "nationally oriented and sovereign" rather than "a product of abstract transnational intelligence behind which alien interests are concealed". [4] That severely hinders the possibilities for people-to-people contacts. At both the national and supranational levels the EU is concerned about (alleged) Russian attempts to interfere in its political life (influencing elections and referenda, hacking data, etc.). Evidence of Russian "interference" is frequently identified when the EU or its member states encounter a problem and Russian-speaking populations in some EU member states are perceived to be a potential problem, due to their exposure to Russian propaganda. This geopoliticisation of internal politics on both sides undermines trust among the peoples of the EU and Russia. In addition, the pandemic severely curtailed personal contacts (tourism, business, academic, cultural), making people more susceptible to manipulation.

Yet neither the EU nor Russia, nor the international system as a whole are likely to change in the near future. So the duty of an analyst is to suggest paths the EU and Russia could explore to mutual benefit in the short to medium term

Given these five factors, the prospects for EU-Russia relations are poor. The window of opportunity for any long-term planning has closed. Yet neither the EU nor Russia, nor the international system as a whole are likely to change in the near future. So the duty of an analyst is to suggest paths the EU and Russia could explore to mutual benefit in the short to medium term. Three avenues deserve attention.

On the political track the EU could become more active in arms control talks (in particular on extending existing START obligations). The EU and Russia have also demonstrated their ability to cooperate on regional crises in the shared neighbourhood (Moldova in 2019) and beyond (Libya). Russia, the EU, and other major players could also think about damage limitation in information (disinformation) and cyber security. An all-embracing initiative would currently appear impossible, but specific areas could be considered (such as limiting "infodemic" mechanisms or agreeing to refrain from cyber-attacks of specific kinds or on critical objects). Finally, bolstering international institutions could be a shared priority for Russia and the EU. The possibilities of this track will depend heavily on the outcome of the 2020 US elections.

On the economic track, the EU and Russia could engage in consultations on energy transition and climate change. Climate is a global concern, while the EU and Russia remain interdependent energy-wise, with vested economic interests. This area requires major efforts on both sides. The EU could refrain from framing the Green Deal in terms of its own energy security and self-sufficiency, and consider the economic sustainability of its transition, including continuing gas imports from Russia. The tone of the EU's external communication on climate change could become less condescending. Finally, efforts should be made to ensure that sanctions do not impede business in this field. The Russian political elite, for its part, has to realize that the energy transition is the EU's long-term policy choice. That could unlock new opportunities in Russia and EU-Russian relations (adapting existing energy businesses, creating new climate-related ones). It will also require an improvement in the business climate in Russia. In addition, Russia should more boldly push the message that limiting climate change (decarbonisation of the economy) overlaps with the energy transition but is not identical. Finally, domestic legislation to reduce Russian greenhouse gas emissions is essential to indicate that Russia means business in this field.

The EU and Russia remain neighbours; their border regions can only flourish through cross-border cooperation that makes them centres of new growth. The Arctic region could become another field of fruitful cooperation, where the EU's economic and environmental knowledge and skills could contribute to Russian plans (the 2021 review of the EU's Arctic strategy can be a starting point). This will also require a less condescending attitude on the part of the EU and shielding from the pressure of sanctions. Russia, for its part, will have to accept that there are good economic and environmental reasons in cooperating with the EU on the Arctic development. Recent environmental disasters in Russia serve as a powerful reminder.

On the transnational track, effort should be invested in education mobility in both directions. This socialisation is of great importance in fostering trust and mutual understanding. Real-life cultural exchanges, expert meetings and tourism should also restart as soon as the pandemic allows. These are essential channels of socialisation and exchange.

Cooperation in the field of research and development represents an essential contribution to long-term economic growth. Moreover, scientific cooperation, publications in renowned peer-reviewed international journals, and observance of international testing and certification requirements could limit politicisation effects in certain socially salient areas (like vaccine development). Visa constraints on both sides and Covid-related travel restrictions have negatively affected contacts. Both the EU and Russia are, however, interested in improving the commercial application of research.

These three avenues and the associated steps do not form a holistic long-term plan for EU-Russia relations. Rather they represent an outline of what could be done to prevent further deterioration. They indicate how relations can serve the interests of both Moscow and Brussels, in particular in realising their domestic policy priorities, in resolving internal problems and securing greater international stability.

The experience of détente suggests that the parties should first express their concerns and grievances before moving to the stage where they look for solutions that take into account the vulnerabilities of both sides. In EU-Russia relations the first stage has lasted at least since Vladimir Putin's notorious 2007 Munich speech, and has exhausted itself. Russia should stop reproaching the West for mismanaging (and misinterpreting) the end of the Cold War and for subsequent developments in global security architecture. That criticism is merely an excuse to justify Russia's behaviour today. The EU for its part should stop expecting Russia to return to the 1990s and become a "normal European country". This rhetoric provokes the Russian elite while providing the EU with a comforting explanation for the failure of its normative power in Russia. Further, both sides could stop belittling each other and exaggerating the other side's internal problems. That does not mean that mutual criticism should stop. It is an essential part of any democratic process. And it is useful to learn from the successes and failures of the other side. However, it makes more sense for Russia and the EU to concentrate on their own internal agendas and on how mutual relations could advance their internal policy priorities.

The content of this paper is the sole responsibility of the author and does not represent the position of individual EUREN members or EUREN as a group.

[2] State of the Union Address by President von der Leyen at the European Parliament Plenary, September 16, 2020.