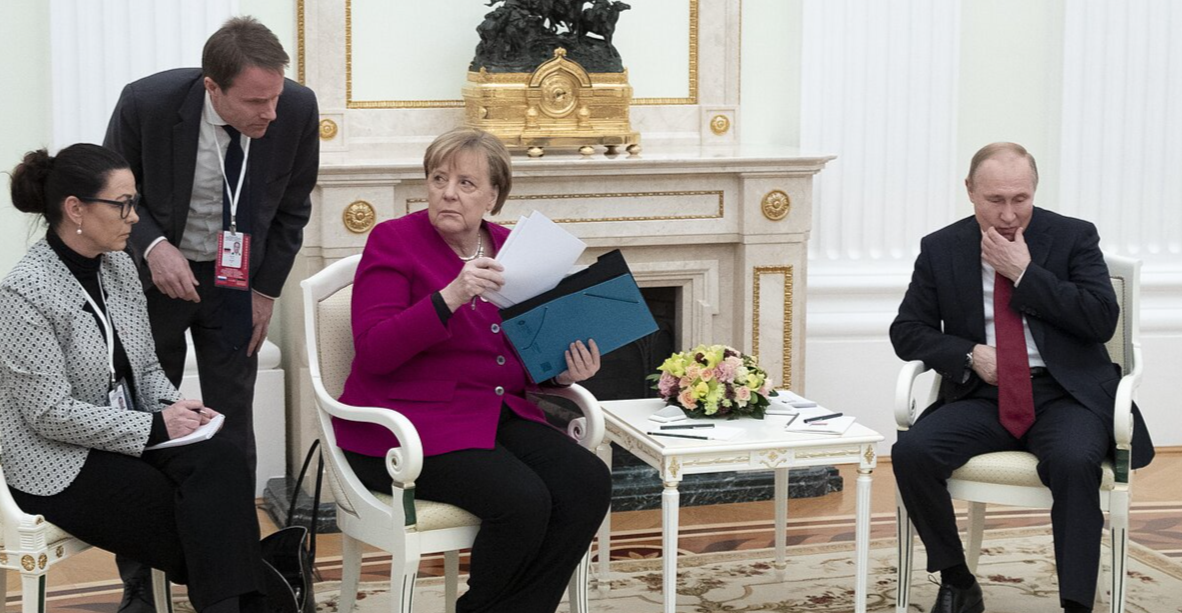 M
What Russia Doesn't Get
About Germany

oscow has repeatedly rejected any responsibility for its most contentious actions. As a result, Berlin's trust and willingness to invest in the relationship with Russia has been wearing down for years.

Ever since German Chancellor Angela Merkel announced on September 2 that Kremlin critic Alexei Navalny had been poisoned with the nerve agent Novichok, the term "turning point" has been used many times in Russia to describe the implications this will have for Germany's attitude toward Russia. As Carnegie's Dmitri Trenin writes, Germany will cease its efforts to understand Russian motives and to interpret and mediate between Russia and German allies within the EU and NATO. Berlin, he says, is ending "the era launched by Gorbachev of a trusting and, for many years, friendly relationship with Moscow."

But that era ended long ago. Rather than a turning point, Merkel´s statement was yet another link in a chain of events that have been undermining German trust and willingness to accommodate Russia's positions and increasingly destructive policies. The astonishment currently being expressed in Russia speaks to a lack of understanding of how Russia is seen in Germany, and how this perception has changed over the years.

Russian misjudgements of German policies date back to the 1990s. In the wake of German unification, Germany took it upon itself to act as an advocate for Russia's closest possible rapprochement with European political and economic structures. But many in Russia overlooked the fact that Germany had also pledged to build strong ties with its Central Eastern European neighbors, and to be their door opener to European integration. From a German perspective, this was imperative after the horrors Nazi Germany had inflicted on those countries during World War II. Russia, absorbed by its own domestic troubles, paid little attention to its former Warsaw Pact allies — but many in Moscow still saw them as Russia's backyard. As NATO enlargement became a reality toward the end of the 1990s, it triggered harsh reactions, and Germany and Russia found themselves on different sides of the fence.

The 2000s were a turbulent time in German policy on Russia

The 2000s were a turbulent time in German policy on Russia. The relationship with Poland, the Baltic states and other Central Eastern European countries had been a priority through to the 2004 EU enlargement. Before that, the German foreign policy community had not given much consideration to Russia's post-Soviet neighbors. However, the enlargement made those countries the EU's direct eastern neighbors, and the new member states became their outspoken advocates within the EU. It took Germany until the early 2010s to adjust to this new situation: a period that had seen revolutions in Georgia and Ukraine, the Russian-Georgian war in August 2008, many ups and downs in the relationship with Poland and other new EU member states, and a lot of soul searching in Berlin about Germany's relationship with Russia. Gerhard Schröder's chancellorship had ended in 2005. Two consecutive coalitions led by Merkel bounced between the traditional German focus on Russia and sympathy for the pro-European democratic movements in Georgia and Ukraine; between (short-lived) dismay over Russian President Vladimir Putin's speech at the 2007 Munich Security conference and the 2008 war with Georgia, and the idea of a modernization partnership with Russia; between the desire to forge a strategic partnership between the EU and Russia, and the striving of the new EU member states to strengthen relations with their eastern neighbors. This oscillation led to a considerably more granulated understanding of the EU's new eastern neighborhood, combined with an increasingly skeptical attitude toward Russia's hegemonic ambition in the region.

The rigged Duma election in 2011 and the violent crackdown on mass protests in Moscow and other Russian cities that followed only accelerated this change of attitude. The repression accompanying both the end of President Dmitry Medvedev's modernization rhetoric and Putin's return to the Kremlin seriously damaged Russia's image in Germany. For the first time, decision makers in Berlin were forced to reconsider the basic assumptions guiding their policy toward Moscow, namely, that a value-based rapprochement was possible. If ever there was a true turning point in Germany's thinking about Russia, that was it.

Few people in Moscow fully appreciated the depth of the German disappointment. As a result, no one expected Berlin to take a leading role when the EU imposed sanctions against Russia over the annexation of Crimea and the Donbas war. Even when the first two levels of the EU sanctions mechanism (suspension of ongoing negotiations and targeted sanctions against individuals and organisations) had been activated, many still believed that Germany would prevent sectoral economic sanctions from happening. But the escalation of the Donbas war and the downing of Flight MH17 in the summer of 2014 left Berlin with no option but to act. From a German perspective, the Minsk Agreements aimed at ending the Donbas conflict and negotiated by the Normandy Four in September 2014 and February 2015 were not a result of the trust-based relationship between Berlin (and Paris) and Moscow, but of the increasing international pressure and isolation Russia was facing. Moreover, many in Berlin were perfectly aware that Kiev was forced to make painful concessions in the face of Russian escalation dominance.

Since 2014, the list of thorny issues on the bilateral agenda has been growing steadily: in 2015, the computer network of the German Bundestag was hacked, and the attack traced back to the Russian military intelligence agency. In January 2016, Russian state officials and mass media grossly inflated a false story about the alleged abduction and rape of a 13-year-old Russian-German girl, Lisa, by a group of immigrants in Berlin. Russian advances vis-à-vis right-wing extremist parties in various EU member states, including the Alternative for Germany (AfD), and Russian meddling in the 2016 U.S. presidential election and the 2017 French presidential election brought it home to many in Berlin that Moscow's interference in domestic developments elsewhere was no longer limited to Russia's immediate neighborhood. Added to all of this was Russia's inhumane military campaign in Syria, the attempted Novichok murder of Sergei Skripal in 2018 (with several casualties and one dead), and, over and over again, Russia's unconstructive attitude in the Donbas peace negotiations. In August 2019, Tornike Khangoshvili, an ethnic Chechen rebel commander in the Second Chechen War who had sought asylum in Germany, was killed in broad daylight in central Berlin. The perpetrator was arrested immediately. The ensuing investigation not only linked him to Russian state agencies, but also provided evidence that the murder had been ordered by the Russian leadership. Last but not least, since last month's contested presidential election in Belarus, Moscow has thrown its weight behind the country's longtime ruler Alexander Lukashenko, who has used brutal violence to try to suppress the mass demonstrations against the rigged election.

By putting Nord Stream 2 on the table over the Navalny poisoning, Merkel demonstrated that even the strict separation between the political and the economic sphere, a ground rule of German foreign policy, is now in question

For years, Berlin has been trying to strike a balance between punitive action to fend off Russian transgressions, and attempts to preserve dialogue even under the most trying circumstances. It faced a lot of criticism over this, internally, from EU partners and, increasingly, from Washington. This was never grasped or appreciated by the Russian side. On the contrary, Moscow systematically rejects any role and responsibility in the incidents that bother Germany. The stereotypical response to the concerns of Berlin (and others) and calls for restraint is: "Just another case of 'highly likely,'" a phrase much mocked in Russia after the UK's then prime minister Theresa May used it to describe Russia's involvement in the Skripal poisoning. As a result, Berlin's trust and willingness to invest in the relationship with Russia has been wearing down. By putting Nord Stream 2 on the table over the Navalny poisoning, Merkel demonstrated that even the strict separation between the political and the economic sphere, a ground rule of German foreign policy, is now in question.

This does not mean that German discourse about Russia is monolithic. Relations with Russia remain a controversial issue. Many, particularly on both ends of the political spectrum, keep calling for closer relations with Moscow. But the mood in the political center has changed considerably over the past ten years — and not to Russia's advantage.

Nor does it mean that the German political class rejects the responsibility ensuing from the crimes committed by Nazi Germany during World War II (with the exception of the AfD, which Moscow so happily engages with). But a more nuanced understanding of Eastern Europe implies, among other things, greater awareness of the fate of other Soviet Republics, in particularly Ukraine and Belarus, during the German occupation. For many more Germans than in the past, commemoration and reconciliation with Russia remain important, but no longer cover German responsibility vis-à-vis those societies.

Relations with Russia remain a controversial issue. Many, particularly on both ends of the political spectrum, keep calling for closer relations with Moscow

The question remains: why do decision makers in Moscow not get it? There are three possible explanations:

They don't understand. The same is true of uncomfortable interpretations of political developments. Western (U.S.) conspiracies are the favorite explanation of Russian state propaganda for pretty much anything. Moscow insists that its actions are always defensive, which implies that it can never be responsible for any negative development. Such a mindset makes it impossible to establish causal links between one's own actions and their implications. Negative German attitudes cannot have anything to do with Moscow's policy, so they are explained away by Germany's alleged dependence on the United States.

They don't care. There is a general sense of doom in Moscow about the EU, including Germany. Relations have been in a downward spiral for many years. Since Russia is not responsible (see above), there is nothing it can do to improve the situation. Moscow is also guided by the conviction that the West is rapidly losing muscle and relevance in a changing international system, so there is no need to put any real effort into the relationship.

Most likely, there are elements of all of these explanations at play. And Germany will likely not (yet) give up on dialogue with Russia, even after this most recent blow. But Berlin has lost faith and will invest less and less in preserving a functioning relationship. Perhaps it is time for decision makers in Moscow to understand that this has a lot to do with their own actions.